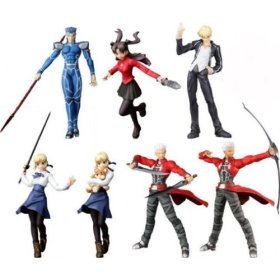 From anime Fate/Stay Night, this is Fate/Stay Night : 7 Trading Figures . Featuring Gilgamesh, Lancer, Archer (2 poses), Rin, and Saber (2 poses). Fate/stay night is a popular H Japanese visual novel game created by TYPE-MOON in 2004. It appears to take place in the same world as their signature work, Tsukihime, although they explore different themes. It was the first commercial title of TYPE-MOON.

Saber (セイバー, Seibā) is Shirō’s Servant, an agile and powerful warrior. Loyal, independent, and reserved, Saber acts coldly but is actually suppressing her emotions to focus on her goals. Her class is considered the “Most Outstanding”, with excellent ratings in all categories. Since her Master cannot effectively provide her with Mana, she minimizes her activity to preserve what she has. Saber is frustrated by Shirō’s “protective” tendencies, believing his erratic and reckless behavior will jeopardize her chances of winning the Holy Grail War.

Rin Tōsaka (遠坂 凛, Tōsaka Rin) is a model student and idol of Shirō’s school who is secretly a sorceress and Master in the Holy Grail War. She is a descendant from a long line of sorcerers, and though she lacks a formal magic education, she is extremely powerful in her own right. Her father was killed in the fourth Holy Grail War, and she has trained since his death to succeed him. She is perceptive, resourceful and avidly competitive. She tried to summon a Saber-class Servant, but she accidentally called Archer instead.

Archer (アーチャー, Āchā) is the Servant of one of the series’ main heroines, Rin Tōsaka. Due to an incomplete summon, he apparently has no memory of his previous life or identity. Archer is sarcastic and cynical – but under his hardened exterior lies a complex and dark personality that unfolds throughout the story. Though skilled with ranged weapons, he can hold his own in mêlée combat. Archer considers Shirō Emiya’s idealism to be weak and delusional, recognizing Shirō’s mentality of “wanting to save everyone” as naïve and impossible.

Lancer (ランサー, Ransā) is the first hostile Servant to appear in the story. Lancer is a fierce but balanced warrior who enjoys combating a worthy opponent. He has a playful attitude and takes a very carefree approach to life, but is quick to work himself into a frenzy during a heated battle. Lancers are hailed as the “Most Agile” of Servant classes. This Lancer was Cúchulainn in his previous life.

Gilgamesh (ギルガメッシュ, Girugamesshu) is an arrogant, selfish, and enigmatic Archer-class Servant. He appears familiar with Fuyuki City and has unrequited love for Saber. Typically clad in an ornate golden armor, he possesses an immense number of Noble Phantasms, though none (with exception of “Ea”) are representative of his true identity. See details