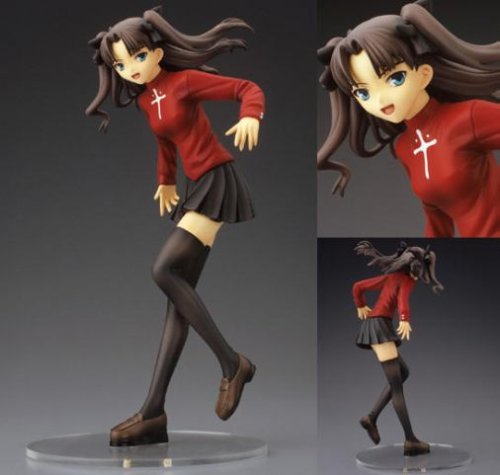 This is  Fate/Stay Night : Rin Tosaka PVC Statue .  Based on the wildly popular anime and visual novel game series Fate/Stay Night and Fate/Hollow Ataraxia! Each detailed 1/8th scale PVC statue stands approximately 7 ” to 8″ with display base, and is packaged in a collectible window box. A model student and idol of Shir’s school, Rin Tosaka is secretly a sorceress and Master in the Holy Grail War. She is descended from a long line of sorcerers, and though lacks a formal magic education, is extremely powerful in her own right. Rin’s energetic nature has been perectly capture by sculptor Kimihito Honda.Saber is loyal, independent, and reserved; she appears cold, but is actually suppressing her emotions to focus on her goals. Game creators Type Moon gave praised the work that Kotobukiya’s Youzou Ogawa has done in replicating Saber in 3D form!