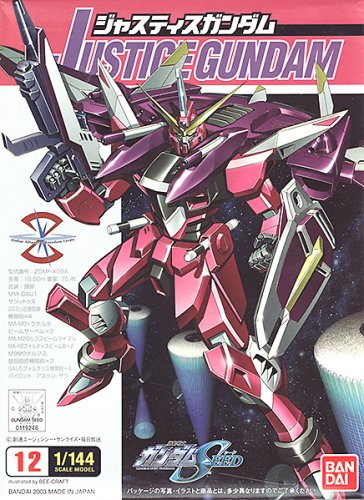 Combat Abilities
The armament of the Justice is conventional and consists of beam sabers, beam boomerangs, head-mounted CIWS guns and a high-energy beam rifle. In addition, the Justice carries a large detachable Fatum-00 pack, which is also well-armed with a pair of beam cannons and multiple machineguns. For defence the suit mounts a single physical shield on its left arm.

System Features
As with the other four Gundam units produced by ZAFT at its time, the Justice is equipped with a Neutron Jammer Canceller, which counters the effects of the ubiquitous Neutron Jammers and allows these suits to be powered by nuclear reactors. This gives them almost limitless combat endurance, even with Phase Shift armor activated.

Like the Freedom, the Justice can dock with the powerful METEOR weapon platform, granting it powerful thrusters and an even more powerful armament of battleship-caliber beam cannons, large beam swords, and dozens of heavy missile launchers.

Justice also mounts a tall sensor spine on the top of its head, similar to that of the GAT-X303 Aegis, indicating that it was likely also intended as a commander-type mobile suit.