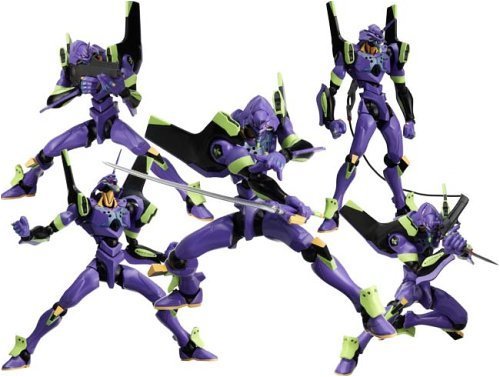 Evangelion Unit 01 (Shogōki: 初号機). Created in the Third Annex of Gehirn’s Artificial Evolution Laboratory in Hakone from 2003 to 2004 and deemed a functional Eva unit in 2014, Unit 01 is piloted by Shinji Ikari (with Rei or a Rei Dummy Plug as backup pilots), and has the best battle record of all the Evangelions. It frequently acts independently (the “berserker” mode), without the instructions of a pilot and without any apparent power source. The Eva will also take action to protect its pilot while sometimes servicing other interests. The Eva’s resident soul, Yui Ikari (Shinji’s mother), appears to be responsible for such events. Unit 01 is called the “Test Type,” perhaps because of the experimental way in which it was created: although Unit 01 seems to be an Adam-derived cybernetic organism like all other Evangelions, it is the sole Eva to have been born from Lilith.

Upon savagely disfiguring the fourteenth angel, Zeruel, it proceeded to devour the Angel and assimilated its S² Engine, making Unit 01 the first physically complete Evangelion prior to the construction of the Mass Production units. The S² Engine seems to be used only at Unit 01’s discretion; after acquiring it, the Eva is still sent into battle with an umbilical cable. Just before Unit 01 absorbed the S² Engine, it used one of Zeruel’s arms to regenerate its severed left arm, demonstrating the Angelic ability of regeneration. The Mass Production models were also equipped with Nerv-developed S² Engines but it is a common misconception that they also have the ability to regenerate (see entry below).

Unit 01’s armor is primarily purple; some components are colored neon green, light blue, orange, and black. The helmet, with its prominent horn and “frill,” is vaguely evocative of a ceratopsid dinosaur. The pectoral plates are different from those seen on any other Eva. The humanoid entity beneath the armor has light brown skin, two emerald-green eyes, four small nostrils positioned preorbitally, and red blood.

As a result of Third Impact, at the conclusion of The End of Evangelion, Unit 01 is left floating adrift in space, fossilized and still containing the soul of Yui Ikari, where it will outlast the sun and moon, as an eternal testament that the human race existed.

In the Rebuild of Evangelion series, Unit 01 sports more neon green highlights on the head, chest, abdomen, and arms. The knife and its storage mechanism are also redesigned, but most of the armor has not changed. During its fight with Sachiel an onscreen graphic notes that Sachiel has blood type Blue 04 (since it is the fourth Angel) and Unit 01 has blood type Blue A*, likely a reference to the Eva units being derived from Angels. Shamshel and Ramiel are identified as having blood types Blue 05 and Blue 06, respectively. During its fight with Shamshel, the skin of the humanoid entity beneath the armor is revealed to a lighter color than in the series. See details