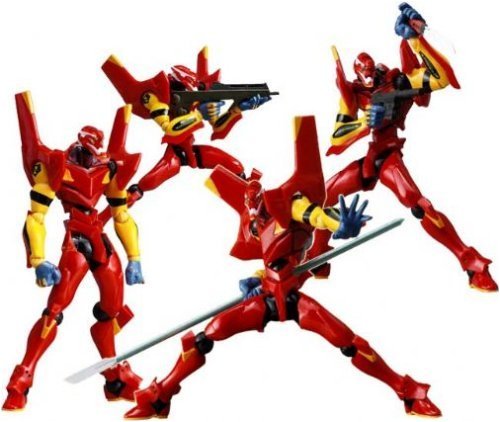 Evangelion Unit 02 (Nigōki: 弐号機) built by Nerv Germany, is the first Production Model Eva. It is piloted by Asuka Langley Soryu and is the first Evangelion built specifically for combat. Unlike Unit 01, it only goes truly “berserk” once, just before its destruction. It has achieved an unusually high sync ratio with its pilot(s), on two other occasions: once in combat against the 6th angel Gaghiel, and once under the influence of the 17th Angel. The Eva’s armor is primarily red with yellow and white on the arms and head. The head armor has two movable sections, one covering both the jaw and lower eyes and the other above the upper pair of eyes. These plates are hinged and can shift, displaying the Eva’s eyes underneath. This is first seen underwater during the fight with Gaghiel. As a result of being constructed by Nerv Germany, and also as an accommodation for its three-quarters-German pilot, its default language setting is German. It is known to contain the maternal part of the soul of Asuka’s mother. Unit 02 features a different progressive knife from earlier Eva units as well as an internal weapon rack in the right shoulder binder which fires dartlike weapons. Unit 02 has blue blood, which is first seen when the fourteenth Angel, Zeruel, cuts off its arms. It has brown skin and four orange eyes, first seen when the MP Evas tear it apart.

Unit 02 is damaged and incapacitated several times over the course of the series, and is finally destroyed in The End of Evangelion by the mass-produced Evas. Asuka was still highly synchronized with Unit 02 as it was destroyed, thus practically suffering every wound (the frames after the Lance of Longinus is plunged just above the Eva’s left eye show her bleeding rapidly from above her eye, as well as her arm being sliced in half as Unit 02’s arm is cut in two by another Lance). Later, when Shinji emerges from the GeoFront in Unit 01, he is horrified to see one of the mass produced Evas carrying Unit 02’s mangled upper torso in its hands.

In the manga, Kaworu Nagisa, not Asuka, piloted Unit 02 against Armisael since Asuka was left comatose after the battle with Arael. The weapon he used in the battle was a double-bladed chainsaw. Armisael partially merged with Unit 02 while it was still fusing with Unit 00 and Rei. He considered using his powers as an Angel to defeat Armisael, but opted not to in order to continue concealing his true nature. He also referred to the Angel as an “encroachment type” after seeing it begin to fuse with the saw, though he never elaborated on this.

Unit 02 is shown briefly in the credits trailer of Evangelion 2.0: You Can (Not) Advance after the first film is finished. It is being air-dropped from a giant aircraft and appears to have two small horns on its head (which is much more rounded) as well as angled pieces on either side of its mouth. In a later clip in the trailer, Asuka is shown. In the newly released trailer for the second movie it is shown that Unit 02’s helmet is redesigned to have what look like oni horns, and that its shoulder pylons are equipped with a pair of bladed weapons. It also sports more white in several places on its body. It is airdropped into battle at the start of the movie. Later in the film Unit 02 is placed into storage in accordance with The Vatican Treaty- a law stating that no nation can have more than 3 Active Evas- and with Unit 03 arriving from America Gendo decided Unit 02 would be the dismantled Unit (reasons for why Unit 02 and not Unit 00 may be revealed in the future films). When the 10th Angel arrives Mari Makinami breaks into Nerv and hijacks the coreless Evangelion and fights the Angel with it. During the battle she removes the Eva’s inhibitors and enters “The Beast” stage where the Eva becomes monster like. Despite her best efforts Unit 02 is easily defeated, never laying a hand on the Angel. It’s uncertain as of yet if Unit 02 will play a role in the future Rebuild films. See details