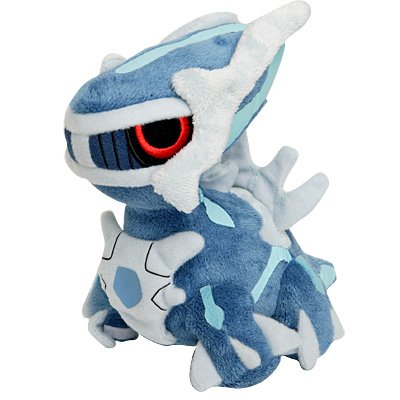 Dialga is a sauropod-like Pokémon. It’s mainly dark blue with some gray metallic portions, such as its chestplate, which has a diamond in the center. It also has various light blue lines. It has a somewhat wing-like structure on its back, and a crest on its head, resembling a type of dinosaur. Dialga also has two horns on top of its head, two fang-like horns around its mouth, long claws, and a short tail.

Dialga had a role in all the Diamond and Pearl movies with the exception of Zorak Master of Illusions. Dialga had a major role in the Rise of Darkrai where it battled against Palkia in between dimensions. Dialga’s Roar of Time cracked the pearl on Palkia’s arm and forced Palkia to flee to Alamos town where the two had another spectacular battle with Dialga having the upper hand. When the sound disk was played from the Time-Space towers Dialga left to it’s own dimension.

Dialga played a minor role in Giratina and the Sky Warrior where Giratina attempted to capture Dialga for polluting it’s world in it’s battle against Palkia. Dialga tried to escape the Reverse world at least twice but Giratina managed to drag it back. Eventually it was able to escape thanks to Shaymin’s Seed flare but not before trapping Giratina in an infinite time loop preventing it from leaving the Reverse world.

Dialga played a major role (larger than Palkia’s or Giratina’s) in Arceus and the Jewel of Life where it saved Pikachu and Piplup from whirlpools at the ruins. It briefly battled Giratina when it arrived to capture Dialga again in revenge only to be stopped by Ash and Sheena convincing Giratina that Dialga had been misunderstood. Later when Arceus appeared to pass out it’s judgement Dialga appeared alongside Palkia and Giratina to stop it. Dialga played a major role by transporting Ash and his friends back in time to stop Damos from betraying Arceus. Dialga was later healed alongside Palkia and Giratina by Arceus and flew off to it’s own dimension.

Dialga also played a major role in The Battle Finale of Legend in the Diamond an Pearl Galactic Battles series alongside Palkia where Cyrus managed to control the two using the red chain. When Uxie, Mesprit and Azelf helped Ash and his friends destroy the chains Dialga and Palkia destroyed the portal created for Cyrus and thus saving them all.

Dialga has a blue body, with white spikes coming out of its neck. On its back there is a fan shaped limb. It has a long straight neck with a head on top. It is Dinosaur-like, and is very similar to Palkia. It has a grey chest plate featuring a Diamond on. Dialga has long claws and a short tail. Dialga’s signature attack is Roar of Time. During the attack, the blue gem on Dialga’s chest glows.

Dialga has the ability Pressure, which causes the opposing Pokémon to use twice as much PP for every successful hit.

Additionally, Dialga has the ability to control time. Dialga, like many other Dragon type Pokémon, can use many various elemental attacks. It is also one of the few Pokémon that can learn the move Aura Sphere. Capturing it gives you an item called the Adamant Orb, which powers Dialga’s attacks.

Dialga is the only Pokémon that can learn the move Roar of Time, its signature move, aside from the special Event Pokémon Darkrai given in the Tenth Movie and in the Toys R’ Us Nintendo World Tour, the Pokémon Smeargle, who can Sketch the move, Pokémon with Metronome, a Pokémon using Mirror Move immediately after Dialga uses the move, and a Level 100 special Event Arceus.