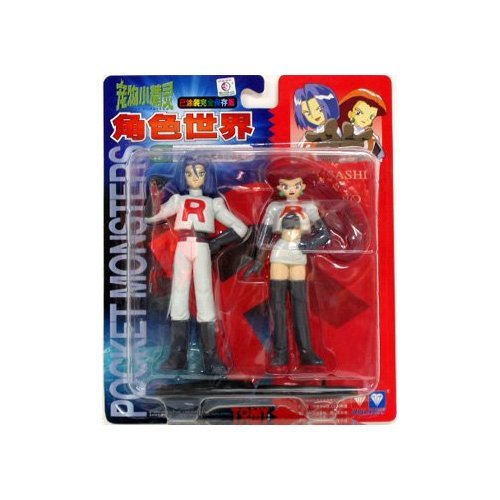 Pokemon : Musashi and Kojiro (Team Rocket) Figure. In the anime and various manga adaptations, Jessie (ムサシ Musashi), James (コジロウ Kojiro), and Meowth (ニャース, Nyāsu, Nyarth) are the main characters of Team Rocket. While they set out to steal Ash Ketchum’s Pikachu and various other Pokémon in almost every episode, they always fail in the end. They use various disguises, traps, and schemes to trick Ash’s group into a false sense of security, and after being revealed, they give a poetic speech, known as their motto, that often changes slightly throughout each season. Jessie tends to don the more masculine clothing in terms of costumes or disguises, while James often cross dresses in extremely feminine outfits, such as tutus. After failing, they are often sent “blasting off” by an explosion or a Pokémon’s attack. They are constantly out to appease their boss, Giovanni, though he finds the group to be incompetent.

They are based on the “evil trio” archetype, as seen from early anime such as the Time Bokan series. They also often bring Giant Mecha to combat the heroes, another staple from Time Bokan.

Jessie and James’s English names are taken from Jesse James, an American outlaw. James’s Japanese name, Kojiro, is taken from Sasaki Kojirō (佐々木小次郎), a prominent Japanese swordsman most famous for being killed by his rival, Miyamoto Musashi (宮本武蔵), the namesake of Jessie. See details