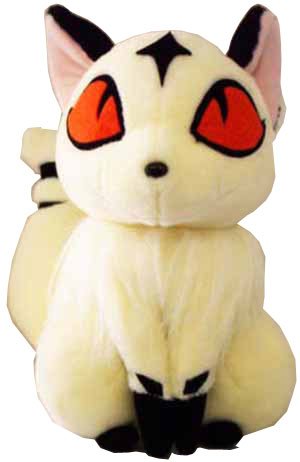 From anime and manga InuYasha, this is InuYasha : Kirara Plush . The plush is approximately 9 inch tall. Kirara (雲母) is Sango’s faithful demon-cat companion. Kirara usually appears to be a small kitten-sized feline with two tails, but can become large enough to carry several passengers (usually Sango, Miroku, and Shippo). Her full-sized form has more prominent fangs, flames around her feet and tail, and enough power to fly through the air fast enough to keep up with InuYasha’s top speed.

At the end of the series after Naraku’s defeat, she joins Kohaku as he trains to become a demon slayer while Sango starts her new life with Miroku and their children. The anime series suggests that she was once the companion of Midoriko, the miko who created the Shikon Jewel.

She is voiced by Tarako in both the original Japanese and the English dubbed version of the series. See details