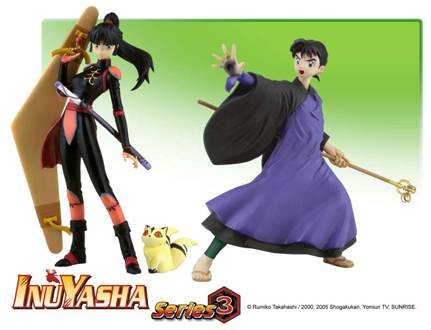 This is InuYasha: Miroku and Sango PVC Figure , from InuYasha anime and manga. Sango comes with the mighty boomerang Hiraikotsu and the demon cat Kilala (Kirara). Miroku is a Buddhist “hōshi” (low-ranking, itinerant monk) who travels the countryside performing services such as exorcisms and yōkai exterminations to earn his living. He suffers from a hereditary curse originally inflicted upon his grandfather Miyatsu (also a Buddhist monk) by Naraku. The curse created a hole in his hand that became a kazaana (風洞 air void or “wind tunnel”) that sucks in anything that is not nailed down, regardless of its mass. However, absorbing poisons harms him, a fact Naraku takes advantage of by creating highly poisonous insects whose presence prevents Miroku from using his kazāna on Naraku or his allies. Miroku uses the kazāna as a powerful weapon against yōkai, but if the curse is not broken (by defeating Naraku), it will grow too large to control and will consume Miroku himself. 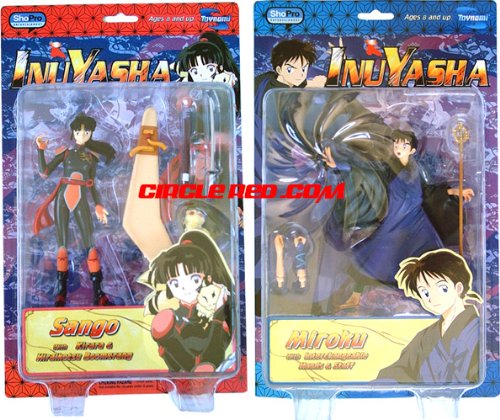 Sango is a “yōkai taijiya” (demon slayer) who hails from a village of professional demon slayers. Sango wields the Hiraikotsu, a massive boomerang made of yōkai bones, and uses a broad repertoire of tools and tricks to battle yōkai. Sango seeks revenge against Naraku for the death of her family and her entire village. In addition, Sango seeks to rescue her brother Kohaku from Naraku’s influence and somehow save his life, even though Kohaku’s life is tied to the jewel shard embedded in his back. She eventually develops romantic feelings for Miroku. Despite the fact that everyone but InuYasha notices her interest, she refuses to admit it exists. The manifestation of her interest often takes the form of hitting Miroku when he flirts with other single women. See details