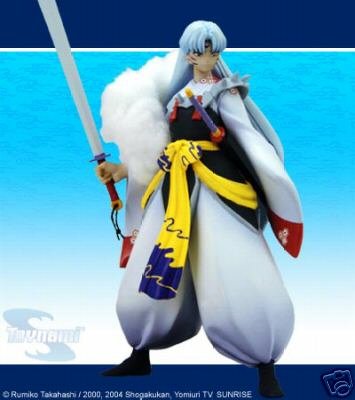 Sesshomaru (殺生丸, Sesshōmaru) is InuYasha’s older half-brother. As a full-blooded demon, he is very powerful, though he too has been unable to completely defeat Naraku. Unlike most demons seen in the series, he shows no interest in possessing any of the Shikon shards, feeling confident of his own strength and seeming to find the use of the gem to enhance one’s power distasteful. He is initially ruthless in dealing with InuYasha, whom he despises as a half-demon who consorts with humans, and attempts to take the sword Tetsusaiga from him. However, Sesshomaru gradually changes after using Tenseiga, another sword made from one of their father’s fangs, to revive the human child Rin. His growing compassion prompts the master swordsmith Totosai to reforge Tenseiga, enabling the Meidou Zangetsuha (“dark path of the dawn’s moon blast”) attack. After Naraku attempts to manipulate him by using Rin as a hostage, Sesshomaru becomes determined to destroy Naraku. He eventually gains his own blade that is a manifestation of his own power, the Bakusaiga. In the anime adaptation, he is voiced by Ken Narita. In the English dub, he is voiced by David Kaye. See details