From manga and anime series created by Go Nagai, this is Mazinger Z : Soul of Chogokin GX-01R Renewal Version . The “R” in GX-01R officially means “Renewal Version”. This classy entry in the Soul Of Chogokin series is no mere color variation or slight retooling–this is a totally new Mazinger Z. It’s slightly bigger and taller than the GX-01 released back in 1998, bringing the toy into perfect scale with not only the recent Aflodai, Minerva X, and other female robot Soul of Chogokin, but also the GX-02R Great Mazinger! GX-01R is mostly diecast, and entirely impressive! Comes with a slew of option parts led by a slick, re-sculpted Jet Scrander that puts the old version to shame; there’s also a Hover Pilder and Jet Pilder, Iron Cutter and Rocket Punch arms, Missile Punch (to launch from a nicely detailed belly bay greatly improved from the GX-01’s), a display base and more. 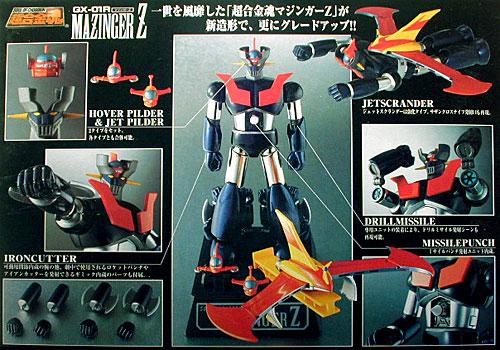 Mazinger Z is a gigantic Super Robot, constructed with a fictitious metal called Chogokin Z (literally Super-Alloy Z), which is forged from a new element mined from a reservoir found only in the sediment of Japan’s Mt. Fuji. The mecha was built by Professor Juzo Kabuto as a secret weapon against the forces of evil, represented in the series by the Mechanical Beasts (mecha used for evil purposes) of Dr. Hell. The latter was the German member of a Japanese archeological team, which discovered ruins of a lost pre-Grecian civilization on an island named Bardos; the civilization was loosely based on the ancient Mycenae, and was called the Mycene Empire in the series. One of their findings was that the Mycene used an army of steel titans about 20 m in height (compare with the Greek legend of Talos). See details