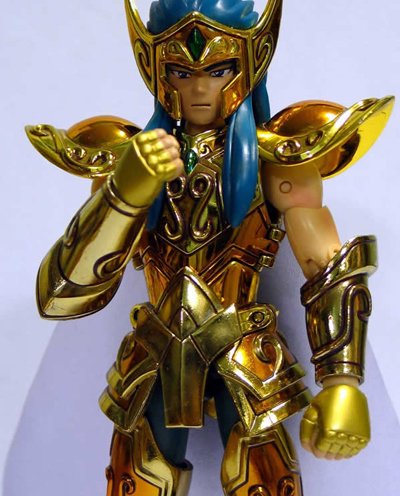 From anime and manga Saint Seiya (Caballeros del Zodiaco), this is Saint Seiya : Gold Cloth Aquarius Camus Action Figure . A PVC figure of Camus, and a set of die-cast Aquarius Cloth. The spiffy ‘book-box’ opens to reveal that it consists of two window boxes; in one window box is a really well-articulated figure of Camus, along with some of his Cloth parts, diadem, gauntlets, etc. In the other half is the rest of his Aquarius Cloth, base, and Hyouga’s head. Deck Camus out in his armor, or build the ‘Aquarius Obje’ and pose it with him. 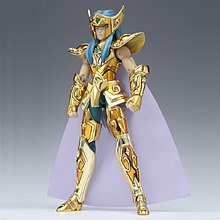 Aquarius Camus (水瓶座のカミュ, Akueriasu no Kamyu) is a Gold Saint, guardian of the temple of Aquarius, and also Cygnus Hyoga and Kraken Isaac’s master in manga. In the anime, he was the master of the Crystal Saint, who was Hyoga and Isaac’s master.

Camus is a cold looking Saint, since he believes the Gold Saint, as the strongest among Athena’s guards, should never show exasperation or it would draw the people into despair.
In the manga, he reveals that he actually knew that the Pope wasn’t working under Athena’s will, but he still kept working under his orders to fulfill his role as the Aquarius Gold Saint. Even so, he was glad to see his pupil Hyoga fighting for the real Athena. 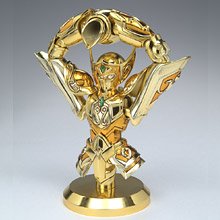 Since Milo fought Hyoga, he mentioned Camus in a way that led the fans to believe they were close friends. Apparently, this was made official since the animation of the Hades saga included more personal interaction between them than the manga, and they are depicted as friends in Saint Seiya Episode G.

Power and abilities
Camus, unlike the other Gold Saints, specialized his Cosmo energy not in create power by the movement of atoms, but by stopping the same movement. Due to this, his power consists not in destroying the matter, but in freezing it. Among those warriors who use this kind of ability, Camus is considered the stronger since he is the one who can lower more the movements, creating a lower temperature. Having mastered the 7th sense, Camus is able to achieve with ease the lowest possible temperature: the Absolute Zero. In the Hades Arc it seems Camus awakes the 8th sense as he is able to enter the Underworld. His techniques are: