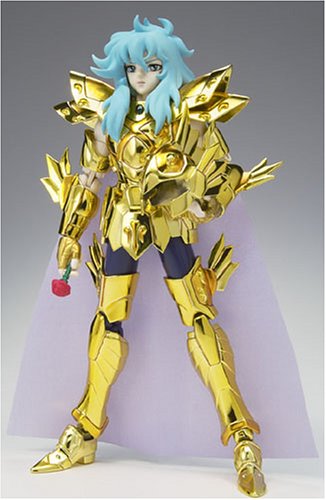 From Saint Seiya (Caballeros del Zodiaco) anime and manga, this is Saint Seiya : Gold Cloth Pisces Aphrodite Action Figure . The figure is about 6″ tall and fully poseable. It is made of metal and plastic. This set also comes with 3 different color roses.

Pisces Aphrodite (魚座のアフロディーテ, Pisukesu no Afurodīte) is guardian of the “Temple of the Twin Fish”. As guardian of the final Temple of Sanctuary, Pisces Aphrodite faces the last two Bronze Saints remaining: Pegasus Seiya and Andromeda Shun. Shun stated that he would hold Aphrodite off, while Seiya manages to pass through the temple. Aphrodite laughs and tells Shun that even if Seiya passes through the temple, between it and the Pope’s hall, lies the garden of Royal Demon Roses, and because Seiya has to traverse it, he would eventually lose his senses and die. As the two engaged in battle, Aphrodite stated that he was the Gold Saint who attacked Andromeda Island and killed Shun’s master, Cepheus Daidalos. Having been told of this by his friend Chameleon Juné, the shy Andromeda Saint had vowed beforehand to defeat the man who killed his beloved master.

Power and abilities
Having mastered the 7th sense, Aphrodite is fully capable of using the plenty of his Cosmo energy. This allows him to move and attack at the speed of light. As every Saint, he also possess some degree of psychic power that allows him to use abilities like telekinesis and telepathy (both implied, since he was never showed using any of those). At the end of the Hades’ arc, it is hinted that Aphrodite was able to use the 8th sense as well, allowing his soul to move freely on the underworld without being subject to its laws.

In Saint Seiya: The Lost Canvas, it is revealed that the Pisces Saint is immune to poisons due to the fact they live close to the garden of royal demon roses after the Pisces Temple. It is also revealed that the immense beauty of the Pisces Saints have an important function: it mesmerizes the enemies during battle. Even so, Aphrodite’s main power remains on his ability to manipulate his Cosmo energy in order to create different kinds of roses that he can freely brandish. Using this ability, he can perform the following techniques: