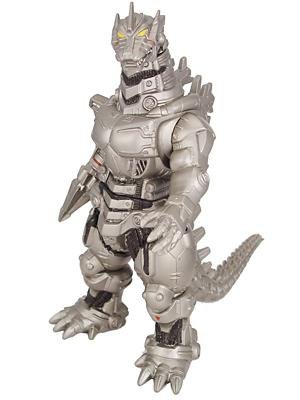 The first Mechagodzilla was created as a weapon of destruction by a race of ape-like aliens, sometimes known as Simians or the Black Hole aliens (See: Alien races from the Godzilla films).

Mechagodzilla first appeared in a pseudo-flesh outer covering, masquerading as the real Godzilla during attacks against Japan in Godzilla vs. Mechagodzilla. Curiously, while the Simeons gave Mechagodzilla a flamethrower in his mouth to mimic Godzilla’s atomic beam, they didn’t bother replicating Godzilla’s unique roar. Godzilla’s dinosaur friend Anguirus wasn’t fooled by the impostor. Mechagodzilla broke his jaw and sent him fleeing underground. The battle went badly for Anguirus, but tipped humanity off to the charade. See details