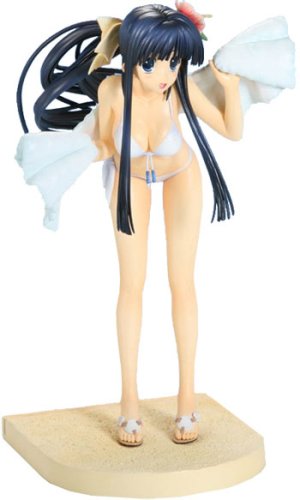 From a Japanese romance visual novel, To Heart 2, this is To Heart 2 : Another Days Yuki Kusakabe Vacation PVC Statue . This figure is decked out in vacation attire, with a skimpy bikini, ponytail, and flower in her hair. Cutie Kusakabe-chan stands over eight inches tall (1/7th scale), and includes a beach towel accessory, and a base resembling a sandy beach with a sky blue backdrop! A KOTOBUKIYA Japanese import! Based on the 2007 release of the TO HEART 2 ANOTHER DAYS video game (and upcoming anime), comes two more bishoujo beauties as PVC statues! Each includes a display base and comes packaged its original Japanese window box. Gorgeous, detailed, and collectible!

Yūki Kusakabe (草壁 優季, Kusakabe Yūki) a mysterious girl that Takaaki meets in school at night, and for some reason she is not usually seen. She carries around a notebook called the “Trash Basket Notebook”. In the anime, she is seen in a flashback in Episode 13 as a young girl who is crying because she is moving away. See details