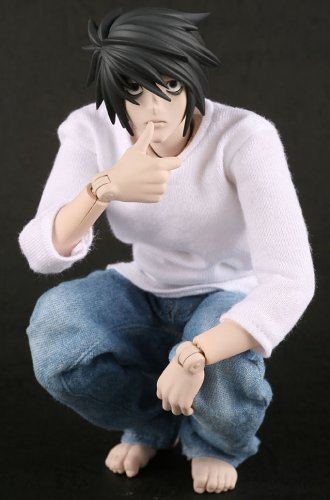 L (Lawliet) is the world’s top-rated detective, tasked with tracking down and arresting Kira. As such, he is Light’s arch-enemy. His disheveled appearance masks his great powers of deduction and insight. L has many quirks, such as sitting in an odd manner, snacking on sweets constantly, and holding objects in a peculiar manner. He often takes drastic strategies to confuse and force the hand of his opponents. On several occasions he has willingly disclosed several of his weaknesses to Kira at the risk of his own life in the hopes that he would lure him into a trap.

Now, a little review about this collection. It’s made of Vinyl. It’s wearing real clothes! not plastic. See details