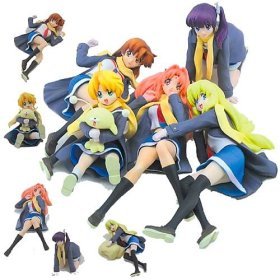 Girls Bravo (ＧＩＲＬＳブラボー Gārusu Burabō?) is a bishōjo manga series, created by Mario Kaneda, which ran in Shonen Ace beginning in December 2000. In 2004, AIC produced an anime adaptation, which originally ran on Fuji Television before switching to WOWOW for the latter half of the series. The anime series is licensed and distributed in North America by Geneon Entertainment, while Tokyopop publishes the manga. In Singapore, the manga is published by Chuang Yi.

Girls Bravo features a young male student named Yukinari Sasaki who was teased and bullied by girls to the point that he developed an allergic reaction, breaking out in hives whenever he comes into contact with a female. One day, when he comes back from school, he falls into his bathtub and is transported to “Seiren”, a mysterious world with a mostly female population. While Seiren is featured in several episodes, the majority of the series takes place in Japan. See details