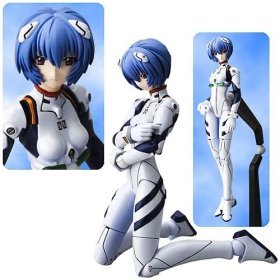 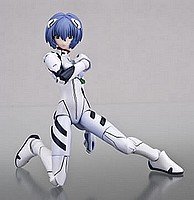 Rei Ayanami (綾波 レイ, Ayanami Rei) is the First Child (First Children in the Japanese version) and pilot of the Evangelion Unit 00. At the beginning of the series, Rei is an enigmatic figure whose unusual behavior confounds her peers. As the series progresses, her personality evolves and she becomes more involved with the people around her, particularly her classmate and fellow Eva pilot Shinji Ikari. She is revealed to be a key factor in the events that conclude the storyline. Her role in this conclusion is not made clear in the TV series, but is one of the principal plot points of The End of Evangelion.

No specific information is given about Rei’s origin or heritage. Ritsuko Akagi states that Rei was born in a certain room deep in the lower levels of Nerv headquarters, but this is all that is explicitly revealed in the series about her creation. The Red Cross Book stated that Rei was created from the “salvaged remains” of Yui Ikari after Yui’s absorption into Unit 01 in 2004. The connection between Rei and Yui is implied a few times during the series. Gendo introduces Rei to the Nerv staff in 2010 as an “acquaintance’s child” whom he is temporarily taking care of. In episode 21, Naoko Akagi says that Rei physically resembles Yui. The character model used in the 2010 scenes is based on development materials in which her age is only 4. See details