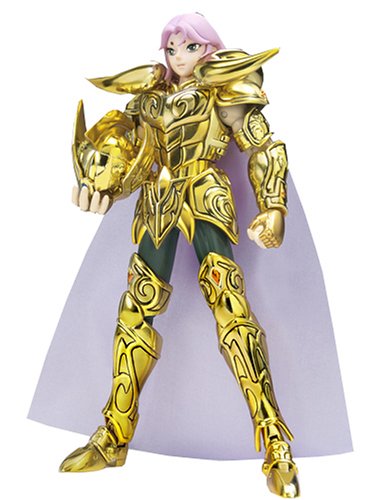 From anime and manga series written and illustrated by Masami Kurumada, this is Saint Seiya : Gold Cloth Aries Mu Action Figure . A PVC figure of Muu, and a set of die-cast Aries Cloth! The spiffy ‘book-box’ opens to reveal that it consists of two window boxes; in one window box is a really well-articulated figure of Muu, along with some of his Cloth parts, helmet, etc. In the other half is the rest of his Aries Cloth and the Aries Object (for holding the armour when it’s not on Muu).

Aries Mu (牡羊座のムウ Ariesu no Mū) is the Aries Gold Saint in the 20th century, guardian of the Temple of the White Ram. Disciple and successor of Aries Shion, and mentor to Kiki. A calm young man whose serene exterior conceals prodigious strength, Mu is also a man of many talents, to the extent of being regarded as the most gifted Gold Saint in psychokinesis, as well as a master in the arts of Cloth restoration. Mu left the Sanctuary shortly after Shion’s murder as he harbored suspicion about the legitimacy of the Pope, settling in the remote Jamir region. 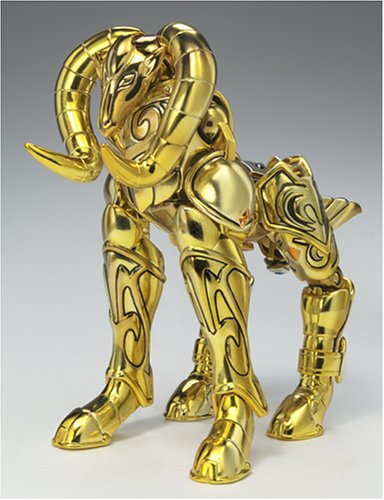 A valuable ally to the Bronze Saints, he first assists them in repairing their Cloths, a service he provides in more than one ocassion. Mu saved the Bronze Saints’ lives during the battles against the Black Saints and assisted Seiya in the duel against Lizard Misty. During the conflict of the twelve temples, he sides with Libra Dohko and the Bronze Saints, revealing to the latter the secret of the Seventh Sense and helping them in the insurrection against the false Pope, as he knew the truth behind his rise to power and the nature of the trial imposed by destiny on Athena. During the holy war against Poseidon, he keeps the eager Gold Saints from parting to the battle, as Hades’ return to Earth was mere weeks away. During the war against Hades, Mu displays fearsome power and battle prowess by defeating powerful Specters, albeit falling before Wyvern Rhadamanthys, who then throws him into the Cocytos prison. Later on, he is revitalized by Athena’s Cosmo and joins his Gold Saint comrades, in their final sacrifice to pierce the impervious Wailing Wall.

His defensive techniques are Crystal Wall (クリスタルウォール Kurisutaru Wōru) which creates a transparent, glass-like barrier made of psycho-power, between Mu and an object. The wall is very durable, and has been shown to shield Mu against everything from normal cosmos attacks to poison scent and rebounding the attack back to the enemy with the same strength it was launched. The strength of the wall is dependent on Mu’s cosmos level; at 100%, it is nearly unbreakable to almost all but Mu’s mentor who taught him the technique, Aries Shion. A variation of this technque is Crystal Net (クリスタルネット Kurisutaru Neto) that creates a psycho-power made spider web. This web can refrain the movements of the targets that get in contact with it. See details