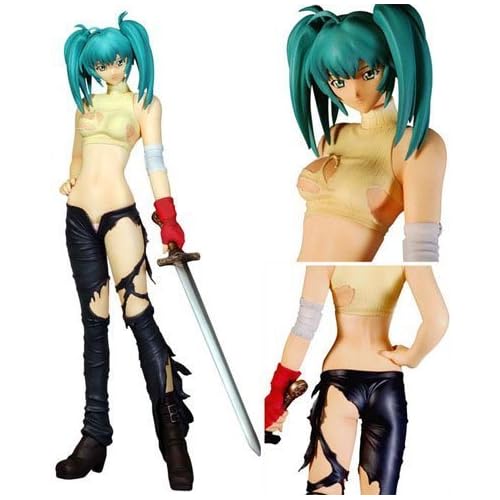 From anime and manga series Ikki Tousen or Battle Vixens, this is Ikki Tousen : Ryofu Housen Battle Damaged Version PVC . She’s getting too big for her britches. Whether it’s a fight against one or a thousand enemies, the girls of Ikki Tousen (Battle Vixens) know how to look sexy. No one knows how to strut her stuff while kicking ass better than Rakuyo High School’s number two fighter, Ryofu Housen. This 1:6 scale collectible plastic statue is so ready for battle, she’s bursting out of her seams!

Ryofu Housen (呂布 奉先) (Lu Bu) is a strong bisexual fighter with a very promiscuous personality and a habit for dressing skimpy. She was very skilled at making chi-blasts and was in love with both Saji and her best friend Chinkyuu. She had a love-hate relationship with Saji, who she claims once raped her (Saji only half denies this, claiming that she was not raped because she enjoyed it). Despite trying her best to escape her destiny, she ended up causing it anyway. Afflicted with a deadly illness that would kill her before adulthood, she ended up being manipulated by Saji into causing Toutaku’s death. When she found out that Chinkyuu was raped, she went in search of revenge as her last living act. She was found by Myosai, and the two fought each other. Myosai’s skill added with Ryofu’s failing health was enough for Ryofu to be defeated. She was saved from Myosai’s killing blow by Chinkyuu. Realizing that she was moments away from dying, Ryofu and Chinkyuu then committed a double suicide, dying happily together as their predecessors did 1800 years before. Recommended Age: 18 years and up. See details