From a series of animated films that remake the original anime series Neon Genesis Evangelion, this is Rebuild of Evangelion : Revoltech Fraulein 017 Asuka Langley Shikinami . 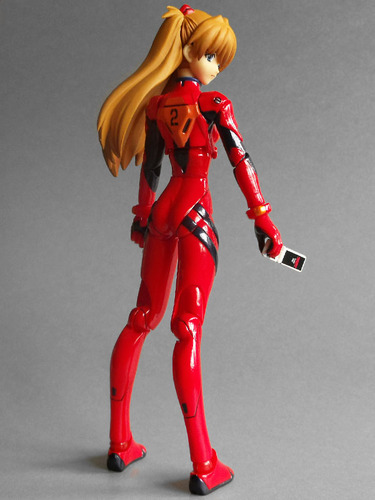 In Rebuild of Evangelion series, Asuka Langley Soryu name is changed to Asuka Langley Shikinami (式波) and ranked as captain of Euro airforce. She is the Second Child and the pilot of Unit 02. Yuko Miyamura voices her in the Japanese series, and Tiffany Grant in the English adaptation. She is of mixed German and Japanese descent, but her nationality is German. Asuka is brash, egotistical, and often verbally abusive (especially to Shinji), and has a very high opinion of her appearance and her considerable skill as an Eva pilot. She also has a fierce desire for independence. Her attitude, however, is a front masking deep-seated insecurities stemming from her traumatic childhood. Asuka is openly infatuated with Ryoji Kaji, but is also attracted to Shinji; however, she cannot properly express her affections.

Asuka’s fiery red hair and everyday wearing of her A10 nerve clips are complemented by her equally fiery temper, pride in being an Evangelion pilot, and her high opinion of her admittedly attractive appearance. She is shown to have a strong need to be self-sufficient and intrusive of other people’s space, especially Shinji’s. However, this personality is shown to often act as a front for Asuka’s own vulnerabilities and insecurities, often shown in more psychologically-driven scenes as a younger version of Asuka. See details