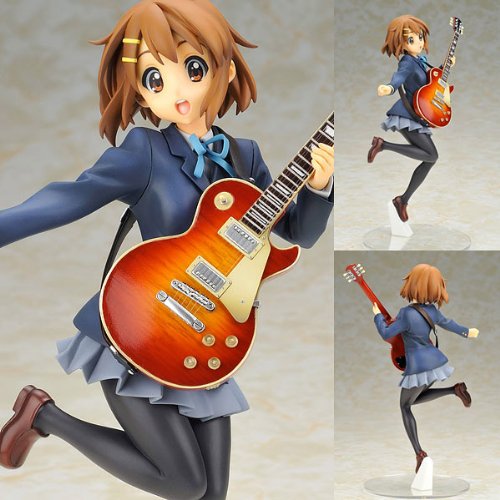 Yui Hirasawa (平沢 唯, Hirasawa Yui) is the main character of K-On!. She is one of the members of the light music club and plays a Heritage Cherry Sunburst Gibson Les Paul Standard electric guitar that she nicknames “Gīta” (ギー太). She does not get good grades in school (though when properly coached, she can achieve astounding results) and is easily distracted by trivialities (mainly those deemed cute and adorable).

Yui is the band’s main vocalist and lead guitarist and has absolute pitch—she can tune her guitar perfectly without a tuner, which greatly impresses Azusa, who has played the guitar much longer than Yui. She has a very easy-going nature, but has incredible focus and retention when she has a clear goal in sight; unfortunately this is limited to only one subject at a time, and her other skills deteriorate quickly (for example, Yui is at one point pressed to make up failing test scores, and she quickly brings her math skills up to par while allowing her guitar skills to deteriorate.) See details