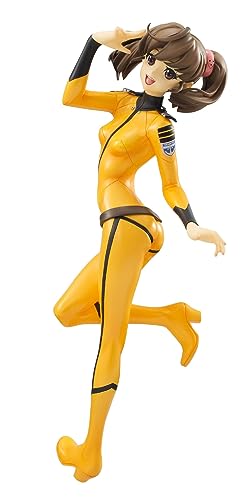 Yuria Misaki (岬百合亜 Misaki Yuria) is Warrant officer and Operations Specialist Cadet, 17 years old. Originally from Yamaguchi prefecture. Born with minor psychic abilities. She sensed something special in the Yamato’s automatic navigation system. Drawn to investigating the central core, she allowed within her the consciousness of Yurisha Iskandar. Yurisha’s body was being transported home in cold sleep because Yurisha had been put into a coma as a result of a traffic accident on Earth. She often hosts a radio show along with Analyzer on the Yamato. She serves as essential personnel for Yuki on the ship’s third watch. Has an ability to see the invisible and sense the supernatural, but isn’t that concerned about it.

When necessary, Yurisha’s personality dominates, then allows Yuria to resurface. The two personalities can be distinguished both by behavior and by hair style. Yuria wears her hear bound in twin pig-tails, Yurisha wears her hair loose. The association proves to be anywhere from useful to life-saving starting from episode 14.