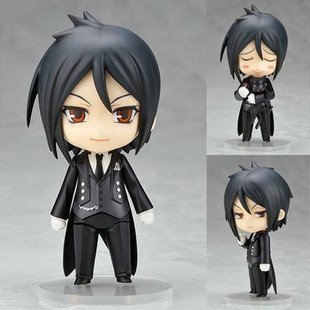 For fans of Black Butler or Kuroshitsuji anime and manga, this is Black Butler Kuroshitsuji : Sebastian Michaelis PVC Nendoroid Figure. Material: PVC. Product Dimensions: 6.2 x 4.4 x 3.4 inches ; 6.4 ounces. It looks so cute and cool. As seen in the pictures, you can swap his faces and hands. After swapping his hands and face, you can re-create a scene from the manga in which he holds up a little black cat that’s his friend!!! How cute is that?? You can also give him a cool looking face and a hand where he’s holding his hair.

Sebastian Michaelis (セバスチャン・ミカエリス Sebasuchan Mikaerisu), the title character, is the demon butler of the Phantomhive household and acts as Ciel’s bodyguard. Being a butler is a job he is completely devoted to, following Ciel’s orders with great loyalty and swiftness. He enjoys challenging Ciel and doesn’t seem to be truly concerned about his well-being at times, insulting and irritating him to see his reaction. However, there are times that he displays concern about Ciel’s life, such as when he was worried when Ciel had an asthma attack, and again later on when he had a panic attack. Sebastian has a fondness for felines in general, stating he cannot foresee or control his own reactions and feelings when in presence of one. As a demon, he has also shown to be extremely ruthless, sadistic, and manipulative to his opponents and is intrigued with humans’ behaviors and attitudes, as he finds them interesting because of their insatiable greed. 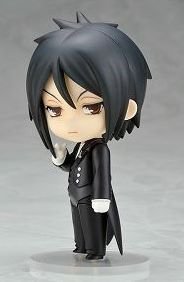 He is highly skilled at practically everything and handles every task, no matter how impossible it is, as well as any problem that arises from the errors of the other staff, with ease. Due to the fact he is a demon who is bound by a Faustian contract, he must abide by Ciel’s will and his contract mark is located on his left hand, allowing Sebastian to find Ciel wherever he is whenever Ciel’s contract mark is exposed. In return, Ciel is able to summon and give orders to Sebastian.