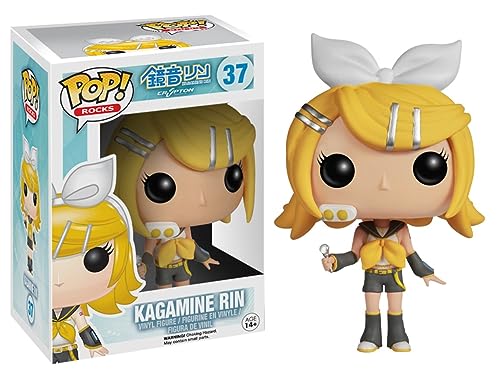 This figure from a singing synthesizer application, this is Vocaloid : Kagamine Rin Funko Pop one of the mascots in awesome Pop! Vinyl stylization! This Vocaloid Kagamine Rim Pop! Vinyl Figure stands 3 3/4-Inch tall and makes a great gift for children and adult collectors alike. When you see just how cool Kagamine Rim looks as a Pop! Vinyl Figure, you’ll want to collect the rest in this line of Vocaloid Pop! Vinyl figures from Funko! Ages 5 and up.

Kagamine Rin (鏡音リン) are humanoid personas voiced by a singing synthesizer application developed by Crypton Future Media, headquartered in Sapporo, Japan. They use Yamaha Corporation’s Vocaloid 2 singing synthesizing technology. Their voices are sampled by Asami Shimoda. They have performed at her concerts onstage as an animated projection. Many songs have been created with them. Rin & Len are portrayed as opposite gender twins with yellow hair. See details