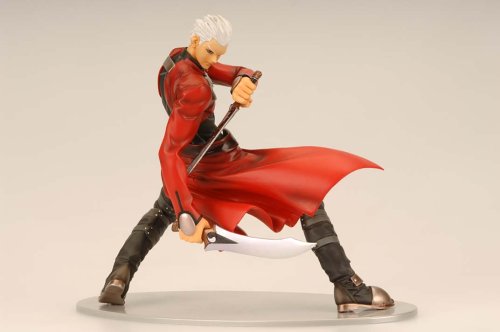 Another Archer figure, this is Fate/Stay Night : Archer 1/6 PVC Statue Figure . Archer (アーチャー, Āchā) is the Servant of one of the series’ main heroines, Rin Tōsaka. Due to an incomplete summon, he apparently has no memory of his previous life or identity. Archer is sarcastic and cynical – but under his hardened exterior lies a complex and dark personality that unfolds throughout the story. Though skilled with ranged weapons, he can hold his own in mêlée combat. Archer considers Shirō Emiya’s idealism to be weak and delusional, recognizing Shirō’s mentality of “wanting to save everyone” as naïve and impossible. 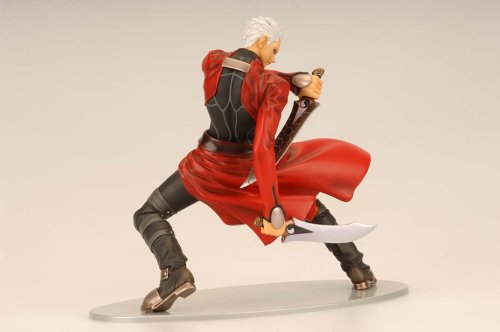 Noble Phantasms
Unlimited Blade Works: Infinite Creation of Swords (無限の剣製, Mugen no kensei), a Reality Marble, also known as an Innate Bounded Field, is an extremely rare high-class sorcery that expands an enclosed alternate reality that is a physical representation of a user’s soul. Within a Reality Marble, users are able to violate the laws of nature, the creation of an ideal battlefield. Although not a true Noble Phantasm, this spell is treated as one. 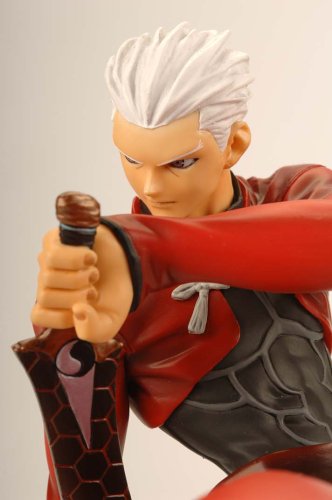 Kanshō (かんしょう) and Bakuya (ばくや): Gàn Jiàng (干将) and Mò Yé (莫邪), An adorned pair of Kan-Dao Chinese falchions, each blade represents the contrasting forces of Yin Yang. Both swords may be thrown like boomerangs, homing in on an unsuspecting target; if one blade is thrown, it will return to a wielder’s hand as long as its mate is oppositely held. When strengthened with reinforcement sorcery, the blades will extend nearly twice their original length and take on the appearance of tattered feathers; this form is known as Kanshō and Bakuya Overedge. Additionally, each sword provides limited protection against various sorceries.

Caladbolg II (カラドボルグII, Karaduborugu II): The Fake Spiral Sword (偽・螺旋剣, Gi rasenken), This voluted, alabaster sword was fashioned by Archer through a modification of Caladbolg, the legendary weapon of Fergus mac Róich in Irish mythology. Commonly used as an arrow due to its low Mana cost, Archer customized the original Caladbolg so that it would be more aerodynamic. When fired as a Broken Phantasm, Caladblog II’s energy output is roughly equivalent to an attack of rank “A”. The Celtic hero Cú Chulainn has a geis invoked against Caladbolg, and when forced into battle against one from Ulster wielding the weapon, he must submit to defeat. 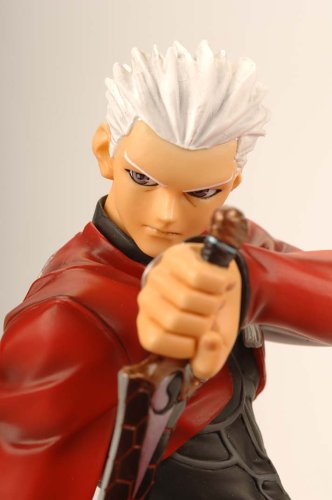 Rho Aias (ロー・アイアス, Rō Aiasu): The Seven Rings that Cover the Fiery Heavens (熾天覆う七つの円環, Shiten ōu nanatsu no enkan), An extremely powerful spiritual aegis, and the only defensive Noble Phantasm Archer has skill with. Originally a huge bronze shield coated with seven layers of tanned ox hide, activation of this Noble Phantasm materializes seven consecutive prismatic flower petals, which each petal emulating the protective strength of a fortress. Amidst legendary Noble Phantasms artifacts, Rho Aias is known for having exceptional and unsurpassed resistance against all types of spears. This shield was once the property of Telamonian Ajax, a Greek hero from the The Iliad who evenly matched Hector of Troy in combat. 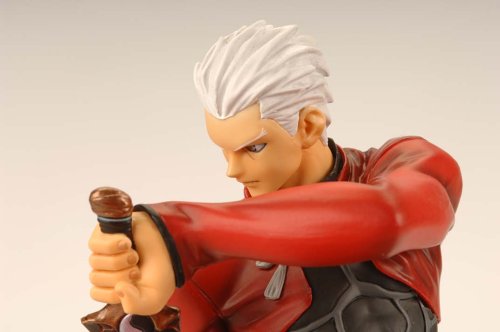 Hrunting (フルンディング, Huruntingu): The Hound of the Red Plains (赤原猟犬, Akahara ryōken), A thick, serrated jet black sword, first seen in Archer’s possession during Fate/hollow ataraxia. When fired as a Broken Phantasm, Hrunting actively seeks out the most direct route to its target so long as Archer continues to aim at the target. It will continue to home in even if its blade is evaded, deflected, or blocked. This Noble Phantasm will also penetrate obstructions of its flight path, and it possesses enough power to bypass four layers of Rho Aias. In Dene, an enchanted sword named Hrunting was gifted onto the hero Beowulf by Unferth, and was later used to no avail in battle against a large ettin known as Grendel’s mother, although Beowulf was grateful to Unferth for its use. See details